Showing posts with the label Bullying
Show All

A review of 'OTOLI' by Sue Mahoney

" The story revolves around three main characters: Alice, Kieran and Jenny and a group of bullies known as the Popular's. Alice Turner is a year eight pupil at Stowton Middle School who has become a victim of bullying by the girl gang – the Popular's. Deeply unhappy, Alice finds herself wandering into a cafe called OTOLI that she has never noticed before. There she meets Jenny the mysterious waitress who always seems to be scrubbing the same table clean. Alice is initially excited to have a friend, but she soon realizes that this friendship may come at a price. At times we depend upon one another and our life "depends upon" another, enough to manipulate someone into convincing you to make bad choices and live with regret. Accept your intuition and go with the thought that this is not right and everything has to be done to stop it. The author is trying to alert the world that bullying is very destructive and has severe consequences and it should become a
Read more

OTOLI is a tough and questioning story of bullying and the consequences of revenge. Although, a relatively short book, this is excellent and much better than I expected. It is haunting and really makes the reader think and engage with the characters. The story revolves around three main characters; Alice, Kieran and Jenny and a group of bullies known as the Populars. Alice Turner is a year eight pupil at Stowton Middle School who has become a victim of bullying by the girl gang – the populars. Deeply unhappy, Alice finds herself wandering into a cafe called OTOLI that she has never noticed before. There she meets Jenny the mysterious waitress who always seems to be scrubbing the same table clean. Alice is initially excited to have a friend, but she soon realizes that this friendship may come at a price.
Post a Comment
Read more

OTOLI ~ "I found myself quite surprised by this book."

" I found myself quite surprised by this book. It was a bit darker than I was expecting but in a really good way. And I loved the concept - how it makes you think about bullying and the affect it really has. The book shows multiple points of view but mainly focuses on Alice, the bullying she faces on a daily basis and her friendship with Jenny. We also learn about Kieran and his friendship with Jenny, as well as learning about Jenny's past, and the reason behind her actions. I thought the author did a great job with the characterisation. Out of all the characters I liked Alice the best. She really grew on me over the course of the novel. At the beginning I felt sorry for her but during the story you really learn how strong and kind hearted she is. Despite what she's has to deal with she still finds the courage to look outside her situation and think of others. I found the story really reflected on how bullying can not only affect how people perceive themsel
Post a Comment
Read more

A review by A Cheshire Lad (Rural Cheshire, UK) As someone who has worked one-to-one with victims of serious bullying for some time, I was particularly eager to read Bryony Allen's new novel "OTOLI". Bullying is serious cancer that can affect the entirety of youngsters' lives if left untreated. It is a subject that needs to be handled seriously and sensitively. Following her razor-witted first novel "Mystery, Deceit and a School Inspector", Bryony Allen, a teacher herself, uses more of her classroom experience to venture into the "Young Adult" book sector with this polished outing. Told simultaneously from the perspectives of intertwined victims' often difficult experiences fitting in to the social jungle both inside and outside of school, "OTOLI" is bang up-to-date for her target audiences. Sleek and paced for the modern market and far from a Stephen King "Carrie"-type revenge tale, "OTOLI" takes quite an
Post a Comment
Read more

A review by A Baker In this beautifully written YA tale, Bryony Allen takes us on a journey into the lonely world of bullied teenager Alice Turner, and the solace she finds in a strange little cafe called Otoli. The waitress who works there, Jenny (who always seems to be scrubbing at something on a tabletop whenever Alice enters) offers her apparently unconditional friendship, and seems to understand the despair Alice feels at being a social outcast at school. However, Jenny's friendship is only apparently unconditional, and as the novel progresses we realise, along with Alice, that there is much more to her new-found friend than meets the eye. What I particularly loved about OTOLI is the way Bryony Allen draws the reader into Alice's world as inexorably as Alice herself is drawn into Jenny's. There's no spoiler in saying that a strong thread of the supernatural runs through the story, which Allen handles with a great subtlety and finesse which calls to mind
Post a Comment
Read more

OTOLI was recently entered in The Wishing Shelf Awards, this is what readers thought...

OTOLI | Fiction: Children/YA, Bullying by Bryony Allen CONTENT 7/10 The readers thought the beginning was very powerful, pulling them into the story. Many noted that the author really seemed to understand what it is like to be the victim of a bully. They sympathised very much with Alice and her journey through the story and they also thought that you dealt well with ‘onlookers’ who feel sorry for the victim but do nothing. They also liked the cliffhanger at the end of the book. A number of the boys felt the book was a little slow. They wanted (I quote) ‘More magic, wizards and cars.’ (Typical boys!) STYLE 9/10 Excellent flow to the text. Speech worked particularly well. Character descriptions were superb but a few wanted more setting description. The teachers noted: ‘The vocab was perfect for this age group.’
Post a Comment
Read more

A book that delivers some food for thought...

A review of 'OTOLI' by Theta Sigma, Resolution Corner blog.   "A book that delivers some food for thought... even for somebody who left school over twenty years ago." The Review Rating 4/5   "You know when you identify with a character in a book and say "I'm like him/her" or "I know what he/she feels like". Well, with this book I can genuinely say that to a point. I initially found out about this book due to the author, Bryony Allen, becoming a friend through Goodreads and I became interested in the book's theme of bullying. The reason for this is because I am a bullying "survivor" (I prefer to use this term rather than "victim﻿") who was bullied physically, verbally and emotionally throughout primary and secondary school. The book is primarily seen through the third person points of view of main characters Alice and Keiran. Both characters are marginalised through bullying - Alice due to the actions of a
Post a Comment
Read more

Author of OTOLI, Bryony Allen has been busy judging the winning entries for a writing competition. 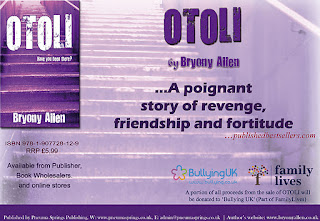 Movellas recently launched a writing competition themed around ‘Bullying’ and titled “Both Sides of the Story”, with Bryony Allen's book OTOLI as the stimulus for the competition. The competition is now over and Bryony Allen was selected to judge the winning entries. Well-done Bryony! The Winners. Bryony Allen is the author of two books: 'Mystery Deceit and a School Inspector' and 'OTOLI'
Post a Comment
Read more

Both Sides of the Story - Movellas Writing competition

Spring Leaf Books has announced that the Kindle e-book editions of the following titles will be free on Amazon on May 12, 2012. If you haven't picked up any of the Authors’ publications yet, this is a great opportunity to try one of them for free. OTOLI by Bryony Allen. The heart-rending story of a young girl who rises above bullying and betrayal of friendship through inner strength and fortitude. ...A poignant story of friendship and revenge. Read more... Amazon Kindle Link - OTOLI Two Little Dicky Birds by Neal James. An incredible crime thriller novel with a tightly-woven plot that will have you in tenterhooks and keep you guessing right till the very end. This is the number one page turner; it will defy your efforts to put it down! ...a gripping detective thriller!! Read more... Amazon Kindle Link - Two Little Dicky Birds ---------- 'OTOLI' and 'Two Little Dicky Birds' are in The People's Book Prize 2012 SPRING Collection. Voti
Post a Comment
Read more
More posts