Showing posts from May, 2014
Show All

Wild Strawberries ~ "an entertaining read, and a useful addition to the literature on the evacuees"

Most evacuee memoirs that I have read were written by people who were evacuated from London, normally fairly early in the Second World War and often from very poor neighbourhoods. This book differs from these books in just about every way! First of all the author was evacuated from Birmingham, not from London. Second he didn't leave until the Birmingham blitz had been underway for some time (and ironically was somewhat close to ending). Third, the author's parent's house in Birmingham was a modern building, complete with electricity and modern plumbing, and his school was also modern and well designed. This gives the book a different tone - the author was evacuated to a house with less modern facilities than his own, and to an overwhelmed school in an older building. He was also evacuated to a house in a hamlet near Yoxall in Staffordshire, quite close to my own home village. After a comparatively short period here, the author was diagnosed with scabies, and moved to
Post a Comment
Read more

During the early 1990s, having got hold of copies of the original coverage of the case in the SUN newspaper from the library at Colindale, I professed myself an early 'Cutbushist.' In 2011 Thomas Cutbush remains a viable JTR suspect for at least three reasons, all uncovered when his Broadmoor Asylum file was released in November 2008. Firstly, he matches eye-witness descriptions: aged 22, 5ft 9.5 inches tall, eyes dark blue (very sharp), complexion dark. Secondly, his illness was ascribed to over-study, a common feature of Ripper suspects if a trifle lacking today. Finally, and most tellingly, attendants at the Asylum seem to have been assigned duties which involved spying on him. A night attendant called Bailey was listening outside Cutbush's window one night. Mr Bailey heard him say that if he had a knife suitable for the job he would rip up the attendants. Such eavesdropping confirms the long-held belief that staff at Broadmoor Asylum once suspected that they
Post a Comment
Read more

A review by A Cheshire Lad (Rural Cheshire, UK) As someone who has worked one-to-one with victims of serious bullying for some time, I was particularly eager to read Bryony Allen's new novel "OTOLI". Bullying is serious cancer that can affect the entirety of youngsters' lives if left untreated. It is a subject that needs to be handled seriously and sensitively. Following her razor-witted first novel "Mystery, Deceit and a School Inspector", Bryony Allen, a teacher herself, uses more of her classroom experience to venture into the "Young Adult" book sector with this polished outing. Told simultaneously from the perspectives of intertwined victims' often difficult experiences fitting in to the social jungle both inside and outside of school, "OTOLI" is bang up-to-date for her target audiences. Sleek and paced for the modern market and far from a Stephen King "Carrie"-type revenge tale, "OTOLI" takes quite an
Post a Comment
Read more

A review by A Baker In this beautifully written YA tale, Bryony Allen takes us on a journey into the lonely world of bullied teenager Alice Turner, and the solace she finds in a strange little cafe called Otoli. The waitress who works there, Jenny (who always seems to be scrubbing at something on a tabletop whenever Alice enters) offers her apparently unconditional friendship, and seems to understand the despair Alice feels at being a social outcast at school. However, Jenny's friendship is only apparently unconditional, and as the novel progresses we realise, along with Alice, that there is much more to her new-found friend than meets the eye. What I particularly loved about OTOLI is the way Bryony Allen draws the reader into Alice's world as inexorably as Alice herself is drawn into Jenny's. There's no spoiler in saying that a strong thread of the supernatural runs through the story, which Allen handles with a great subtlety and finesse which calls to mind
Post a Comment
Read more

"In All Probability" - "The collection is very diverse. I simply loved the characters."

A collection of short stories. I must confess, I liked this set of stories as much as the collection in "Jumble Tales". These stories are just a little bit dark in nature. That does not take away from them in the least. I found this book very enjoyable and easy to read. I really like the writing style of this author. This is a great book to sit down and read a little bit at a time. The stories are long enough to be interesting yet, short enough to read at any time. All types of different subject matter could show up at any point in any tale. Each very different from the next yet, common at the same time. I really enjoyed this book. Sometimes it is nice to change up your reading material. Steve Morris allows you to do this without losing a lively, colorful, and lovable story. The collection is very diverse. I simply loved the characters. Not everyone can have a happy ending. It keeps you guessing, for the stories do not usually end the way you predict they will. Very
Post a Comment
Read more

About Book 1 Title: The Trees Have Hearts | Author: Mrs. D | Publication Date: March 31, 2014 | Publisher: Mrs.D. Books Publisher | Number of pages: 41 | Recommended age: 6 to 10 Summary: A Mom's Choice Award Winner The story of a young girl, left friendless because she could not speak a new language, will touch your heart. It will take your child into the imaginary world of a little girl who moved to America from a different country. Unable to speak English, the lonely girl could not find friends. She lived in an old house with a small garden, where three blooming trees and the mysterious wind became her first imaginary friends. The garden friends developed a wonderful friendship with the lonely girl, and helped her overcome her fears and worries. Through the story, they taught her how to make real friends and helped her cope with difficult moments while adapting to new surroundings. Unforgettable characters will open a beautiful imaginary world to young readers, invit
Post a Comment
Read more

Entitled 'The Wichenford Court Murder,' the story is written in the classic tradition of British detective fiction. As the story unfold, the novel's narrator shares with the reader all the information available to the investigating detectives. Readers can race against the detectives to figure out 'whodunit.' "My novels are mostly set in the county of Worchester, which provides just the sort of rural environment suitable for intellectual games in the mould of the classics of British crime fiction: country houses, quaint villages, gentle hills, calm rivers,  tranquil country lanes, views across farm-speckled valleys, and plentiful woodland ringing with the sound of bird-song. In a way my novels attempt to capture a more gracious age than our own, when the countryside was inhabited by farm-workers, when the roads were not so noisy and before the age of mass entertainment," said Julius Falconer.
Post a Comment
Read more

There’s a Jack-the-Ripper style psychopath on the loose! 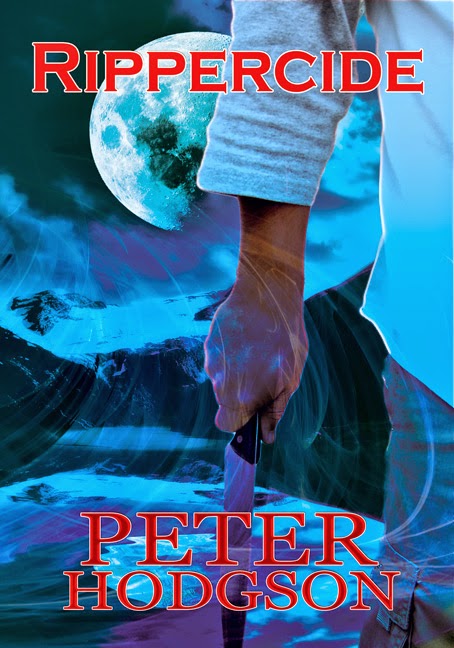 Rippercide By Peter Hodgson His perverted desire is to become the world’s most infamous serial killer. He is a psychopath, emulating killers like Jack the Ripper. A popular seaside resort becomes his stalking ground. The terror intensifies as the bodies of young women are discovered mutilated. While police officials follow traditional lines of enquiry in their search for a forensically aware serial killer, Sheridan and Becky grapple with obscure clues. Piece by piece the clues begin to make sense.    As detectives eventually close in on their prime suspect, Becky follows her intuition in an attempt to solve the mystery of the killer’s identity. And the nightmare begins... .. Find out more
Post a Comment
Read more

About the Book Title: Mighty Dads | Author: Joan Holub | Illustrator: James Dean | Publication Date: April 29, 2014 | Publisher: Scholastic | Pages: 40 | Recommended Ages: 3+ Summary: A new constructacular picture book from the New York Times bestselling creator of Pete the Cat, James Dean and bestselling author, Joan Holub. Mighty dads, strong and tall, help their children, young and small. They keep them safe and bolted tight and show them how to build things right. Inventively told through James Dean's colorful construction vehicle characters, MIGHTY DADS is an adoring dedication to hardworking fathers and the subtle ways they teach their boys and girls to follow in their tracks. The Dump Trucks learn to get dirty. Crane keeps his little one safe from harm. The busy Cement Mixer gives his daughter a hug. The Forklift cheers his son on. A surprising and touching view of a father's love for his children, MIGHTY DADS is the perfect way to say: I'm proud o
Post a Comment
Read more

About the Book Title: Faery Swap | Author: Susan Kaye Quinn | Publication Date: December 19, 2013 | Publisher: Independent | Pages: 281 | Recommended Ages: 10+ Summary: Warrior faery princes can be very stubborn. Especially when they possess your body. Fourteen-year-old Finn just wants to keep his little sister out of Child Protective Services--an epic challenge with their parentally-missing-in-action dad moving them to England, near the famous Stonehenge rocks. Warrior faery Prince Zaneyr just wants to escape his father's reckless plan to repair the Rift--a catastrophe that ripped the faery realm from Earth 4,000 years ago and set it adrift in an alternate, timeless dimension. When Zaneyr tricks Finn into swapping places, Finn becomes a bodiless soul stuck in the Otherworld, and Zaneyr uses Finn's body to fight off his father's seekers on Earth. Between them, they have two souls and only one body... and both worlds to save before the dimensional window bet
Post a Comment
Read more
More posts