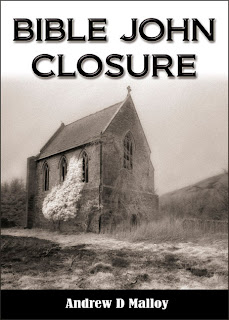 Andrew Malloy releases a gripping thriller set in Glasgow in the late 1960s based on the true-story of the serial killer prophetically dubbed ‘Bible John’.
The illegitimate birth of twin boys in 1945: the infamous Bible John slayings: two present day murders.

What is the terrifying link that connects all three?
During the late 1960’s, the actions of a vicious serial killer prophetically dubbed ‘Bible John’ caused mass hysteria among the young women of Glasgow, holding them in a chilling, vice-like grip of terror. Then, inexplicably, in late 1969, almost as quickly as they had begun, the killings stopped.
…Find out more…
Author Andrew Malloy says: “The scene is set for a nightmarish journey for Mason Blackwell and his team as the crime count threatens to spiral out of control. Expect the unexpected as the story dramatically twists and turns, sending all concerned towards a violent and terrifying conclusion...”
A fictionalised account of the story of 1960s Glasgow serial killer - ‘Bible John’.
“…chilling blood-curdling murder mystery”
...publishedbestsellers.com
.
Book Promotion Book Reviews Books Fiction