- December 03, 2010
Bringing you exclusive interviews with authors featured in the Book Savvy Newsletter. 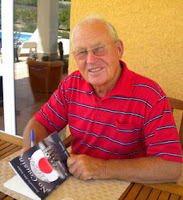 Our Guest is Derek Smith, author of 'No Cousin of Mine' -A book about true life post-war stories. The foreword to this book has been written by John Noakes, probably the most famous of all the presenters of the Blue Peter programme.

Enjoy the interview.
Q1: Can you tell us a little about your book, 'No Cousin of Mine'?
The title 'No Cousin of Mine' is taken from a favourite drinking song of Number 256 RAF squadron that was serving in Western Germany shortly after the end of the Second World War. The book is a sequence of real life stories involving a young man and his comrades during their time of National Service.
It is about being conscripted into a rigidly disciplined, sometimes harsh system and learning how to survive.
It is about young lads, most only 18, entering this system and emerging after 2 years as men.
It is about learning to make the system work for you but at the same time recognising the responsibility of doing a job that entails maintaining fighting aircraft in a safe and serviceable condition in a situation where you are only a few minutes flying time from a real and menacing threat from the East.
Finally it is about the indomitability of the human spirit that will always adapt and gain from such experiences.

Q2: Why did you write this book and why did it take nearly 60 years before you got round to writing 'No Cousin of Mine'?
Two years ago I read a book written by an old school playmate, Geoff Blore. I got in touch via his publisher and we were reunited after almost 70 years. I told him that once, more years ago than I cared to remember, I had started to write a book by longhand many years before word processors, but that when, after a week of struggle, I had ended up with only 4 pages of crossings out and insertions, I had given up and under the demands of a busy life I had never attempted it again. He said that I must write it now and that he would help me. 'No cousin of Mine' was the result.

Q3: How can you be so sure that your recollection of those days is accurate?
If you asked me to recall a conversation I had in 1952, I would be able to recall it with the utmost lucidity. If, however you asked me what I had had for lunch the day before yesterday, I would have no idea. It is called senility.

Q4: What emotion do you seek to evoke in your readers as they read about this period in history?
The book is aimed at two different groups, and the emotions generated will differ immensely. One group will be those who remember this time and may have done National Service. For them it will be an enormous blast of nostalgia. The other group will be those for whom this will be distant history and can have no conception of the emotions evoked by being plucked from home, family and friends, being taught how to kill someone as efficiently as possible, and being plonked down in a distant country knowing that it will be months before you will ever get back home again.
Q5: How have you reacted to your book being described as 'Brilliant - humorous and truly enjoyable?
Several people have written extremely kind reviews that can be seen at amazon.co.uk One lady wrote from Lincolnshire to say that she had found the book 'brilliant, cleverly written and extremely easy to read as it 'moved and flowed.' All these comments, as Dylan Thomas would have said, 'made me blush' but have made me realise that it is not just a 'butch book for boys' but it has an interest for a wider audience.
Q6: What is the first thing you did to promote your book once your publisher accepted your manuscript?
I have been living abroad and found that this made promoting the book very difficult. I have plans to move back to the UK shortly and hope that this will make my efforts more fruitful.
Q7: If you had to pick just one book marketing tool that you've used to promote your book, which would you say has been the most effective?
One of the ways that my friend Geoff Blore has helped has been to sell the book through a mobile book stall that he takes to venues all over the UK. This has proved to be most effective.
Q8: Do you do more promoting online or offline and which do you prefer?
The contemporary wisdom is that the way forward is 'on line', but I cannot help feeling that books are meant to be marketed in a situation where they can be seen and held in the hand - but that's just me!
Q9: Do you use social networks such as Twitter or Facebook to promote your books and have you had any success with it?
I find that as you approach 80 the desire to twitter decreases rapidly.
Q10: Do you have a blog set up to promote your book and what is its effectiveness?
People have placed blogs on the web site set up for me by Pneuma Springs but I have not done so myself. This is something I must address in future.
Q11: Do you recommend authors getting publicists to help them promote their books?
Publicising can be very expensive. I have found that the cost of advertising can sometime outweigh the benefits of any possible returns unless carefully and specifically targeted.
Q:12 Are you thinking of writing a sequel as some people have asked?
Some people have asked when I am going to publish a sequel to 'No cousin of Mine'. I'm afraid the book was a 'one off' but I do have another book in the pipeline.
Q13: Why did you choose Pneuma Springs to publish your book?
Purely by coincidence, by the side of the e mail reply I had from Geoff Blore when I tried to get in touch with him was an advert for Pneuma Springs. I had realised by then that unless you were an established author or a TV personality bringing out a cook book for the Christmas market, you did not stand a snowball's chance in hell of getting a book published by the big traditional publishers. The package being offered by Pneuma Springs seemed too good to be true and I was sufficiently suspicious to 'google' some of their alleged authors. Without exception the feedback I had was extremely favourable. This swung it for me and once I had the book written I contacted them. My book has now been published and so far I have not been disappointed.

Thank you for your time. We wish you every success in your writing career.

Published book: 'No Cousin of Mine'.
Find out more...

Are you a published and would like to be featured in our interview column on this site? Contact us for further information: Booksdirect@publishedbestsellers.co.uk

* Book Savvy is an e-newsletter of Pneuma Springs Publishing, featuring news and information about all published books and new releases with highlights about the authors behind the books. Look out also for helpful resources e.g. blogs, book reviews and of course, discounts, special offers etc.
Authors interviews Book Savvy Spotlight